HomeYWCA Asheville Stands Against House Bill 370
A- A A+

YWCA Asheville staff appeared on WLOS News 13 on Tuesday, August 20th, 2019 to speak out against House Bill 370, which just passed both chambers of the North Carolina General Assembly and is now heading to Governor Roy Cooper’s desk. Governor Cooper has indicated that he will veto the bill. #HB370 would require NC Sheriffs to help ICE detain and deport our community members. Our mission is to eliminate racism and  empower women, and we know that HB370 is bad for women, families, and our communities. We urge Governor Roy Cooper to veto this bill, and we have signed on to the ACLU statement below, standing with hundreds of other organizations and businesses against this anti-immigrant bill. Click on the image below to view the news clip: 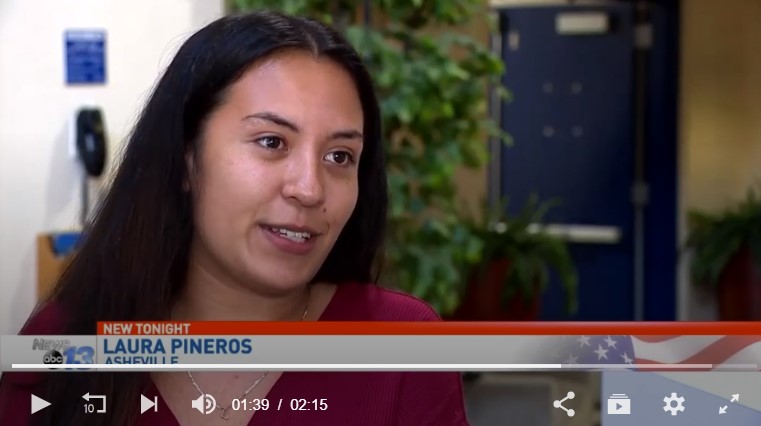 In separate letters, the organizations say the bill would harm North Carolinians by spreading fear within immigrant communities, further accelerating the federal government’s deportation machine, and subverting the will of the voters.

House Bill 370, which has been approved by both chambers of the General Assembly, would require county jails to comply with a request from federal immigration officers to hold someone in jail, even if they are eligible for release under North Carolina law. So-called “ICE detainer requests” often lack probable cause and can lead to the prolonged detention of people without a court order, in violation of the Fourth Amendment to the Constitution.

“By vetoing this brazen attack on North Carolina’s sheriffs and voters who have made it clear they do not want ICE terrorizing their communities, Governor Cooper can send an important message that he supports both local law enforcement and the rights of all communities,” said Susanna Birdsong, Senior Policy Counsel for the ACLU of North Carolina, one of the groups urging Cooper to veto. “This dangerous bill strips local law enforcement of their ability to make decisions in the best interest of public safety, forcing every county in North Carolina to divert resources to do the bidding of President Trump’s deportation force whether they want to or not. Governor Cooper should put a stop to this extreme agenda, stand up for local law enforcement, and veto this bill without delay.”

In a separate letter to Cooper, the ACLU of North Carolina explained the constitutional concerns with requiring sheriffs to unconditionally comply with all detainer requests received from ICE, whose history presents a troubling pattern of illegal arrests.

Last year, voters in North Carolina’s two largest counties – Mecklenburg and Wake – elected sheriffs who campaigned on promises, now fulfilled, to end their involvement in the federal 287(g) program, a partnership with federal immigration officers that has led to the deportation of thousands from North Carolina. Newly elected sheriffs in Buncombe, Forsyth, Guilford, and Durham counties have also announced that they will no longer hold people in jail on ICE detainer requests.

“If Governor Cooper allows this anti-immigrant bill to become law, it will spread more fear across our communities, tear apart families, and force local governments to divert resources to fuel the Trump administration’s deportation pipeline,” said Martha Hernandez, community organizer with Comite de Accion Popular. “It’s important that our state’s highest elected official take a stand for the rights of North Carolina communities and against this extreme anti-immigrant political agenda.”

The full list of groups signing each letter is:

Movement to end Racism and Islamophobia

Planned Parenthood of the Southeast