“We’ll still be here doing the work even when the hashtags fade.” – YWCA of Asheville

Home“We’ll still be here doing the work even when the hashtags fade.” – YWCA of Asheville
A- A A+

Local nonprofits stand firm in the fight for racial justice 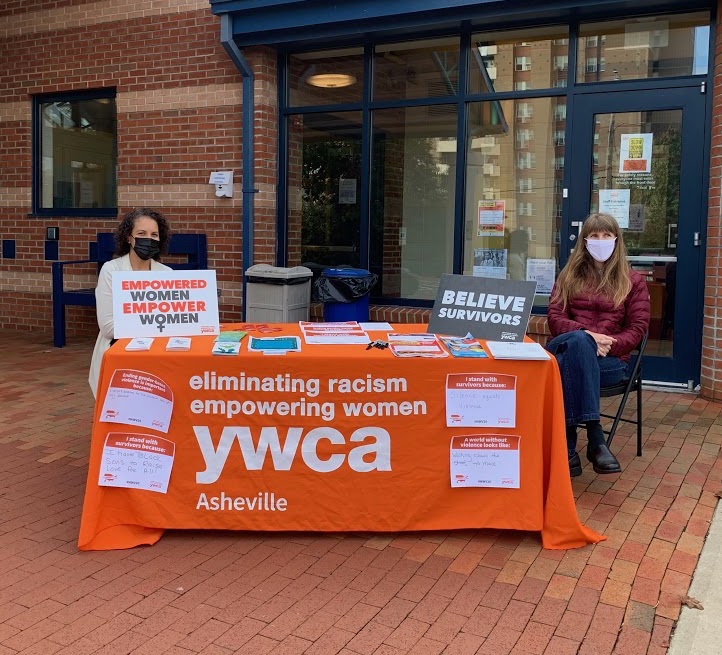 For many local nonprofits that advocate for racial justice, the May 25 killing of George Floyd marked the start of a new phase. The Racial Justice Coalition, for example, experienced a spike in donations amid the summer protests; the Umoja Health, Wellness and Justice Collective has found new opportunities to forge partnerships to further its work, including one with the state Department of Health and Human Services.

But local groups’ dedication to advancing their respective goals didn’t begin with Floyd’s death. Over at YWCA Asheville, eliminating racism “has been part of our mission for the last 113 years,” notes Catalina Slater, the organization’s director of marketing and communications.

What continues to shift, though, is the community’s response to comprehensive issues such as systemic racism and implicit bias. “The conversation for us hasn’t changed,” says Umoja founder Michael Hayes. “It’s just more people are listening now.”

And that evolving understanding, local nonprofit leaders report, is transforming the way both individuals and foundations support such efforts.

WALK THE WALK: Rob Thomas, the Racial Justice Coalition’s community liaison, says his organization is in the midst of a 90-day Walk the Walk campaign. Surveys are underway within communities of color to gauge residents’ views on housing, economic mobility, education, the justice system and reparations. Photo by Tony Shivers/Still Smiling Photography
These days, many residents economically impacted by COVID-19 are contributing to racial justice by helping to expand awareness, rather than by making donations, says Jefferson Ellison, the YMI Cultural Center’s publicist. He tips his hat to “the advocates on the ground who spend a lot of their time educating people online” about issues like white supremacy. “We’re teaching people instead of just yelling at them,” Ellison observes.

For her part, Slater points to in-house initiatives such as the YWCA’s 21-Day Racial Equity and Social Justice Challenge. Launched in August, the online series gave more than 700 participants specific daily tasks designed to enhance their understanding of systemic racism and race-related violence. Although the series ended in September, the materials it used are still available online.

Meanwhile, Rob Thomas, the Racial Justice Coalition’s community liaison, reports that in the immediate aftermath of Floyd’s death, more than 1,300 new volunteers signed up to help the nonprofit promote increased police accountability and policy changes. The tasks these volunteers perform include conducting outreach, creating materials for the group’s social justice campaigns and providing tech support to the organization.

During the pandemic, he continues, one of the greatest challenges is finding ways to develop rapport with so many new members. “It’s very hard to cultivate those relationships through Zoom, but we do it the best way that we can.”

NEW INITIATIVES: The YMI Cultural Center’s mission is expanding, says Jefferson Ellison, the nonprofit’s publicist. “They’re doing a lot of work with literacy, introducing a food bank program and finding ways where they can be supportive of Black people who maneuver through white spaces,” he explains. Photo courtesy of Jawbreaking
Enthusiasm alone, though, is not enough to keep financially stretched nonprofits afloat. Fortunately, within the last six months, new grants have emerged that are specifically tied to racial justice and equity work. And in response to the summer’s racial reckoning, corporations and foundations alike are beginning to reconsider their approaches to giving.

“White supremacy is rooted in control,” Ellison explains. “I think people are realizing that it’s very difficult to be an advocate or an ally if you do not give people the agency and autonomy to do their work.”

As a result, a number of foundations have simplified the application process for racial justice and equity initiatives. In September, the Dogwood Health Trust allocated $1 million for Racial Equity Community Grants, offering up to $25,000 to historically underfunded organizations whose primary purpose is serving Black, Indigenous and other communities of color. The grants are one facet of a $5.5 million strategy to promote racial equity in the 18 WNC counties the trust serves.

Organizations that applied for the grants say the process was surprisingly easy.

In an email exchange with Xpress, Dogwood’s Equity Team said that was no accident. “We recognize that many of the organizations we seek to reach … have either a very small or volunteer staff,” the email stated. “They may not have the time or capacity to respond to a lengthy application requiring complex data or research. Such a process would represent a barrier to an already understaffed organization — the very organizations in need of assistance.”

For grassroots groups like Umoja, that understanding is huge, says Hayes. In the past, grant applications often included qualifying questions about what he calls “the letters behind your name. They’d ask, ‘Are you a Ph.D? Do you hold some kind of master’s degree?’ Well, I don’t have either. But that’s not going to stop me from doing the work.”

Umoja is one of 205 local nonprofits to apply for the new Dogwood grants; awards will be announced in December.

Besides simplifying the application process and streamlining requirements, foundations have also eased restrictions on how grant money can be spent.

Natasha Adwaters, executive director of Children First/Communities in Schools, says several funders have allowed the nonprofit to reallocate funds in order to address needs outside the grants’ original intent.

“I do think people are being more flexible in this time of COVID and racial unrest, because we don’t know what the future is going to hold,” she notes. Her organization provides resources and support for elementary school-age children in Buncombe County.

This overall shift in approach is a major win for local advocacy groups, says Coryn Harris, the YWCA’s chief advancement officer. For many years, she points out, “We have been having the conversation with foundations and corporate-giving programs about this unfunded advocacy and racial justice work. We know that programs alone can’t solve the problems that we see: There have to be structural changes, and that work is often unfunded. So it’s a welcome change.”

Still, Harris contends that more could be done. Topping her wish list is an increase in mandatory giving. Currently, Section 4942 of the IRS code requires private foundations to distribute 5% of the fair market value of their assets each year.

If that figure were upped to 10%, she points out, “We could pump billions of dollars into the economy and toward the folks who are doing the front-line work — at no cost to the government.”

The work goes on

For now, however, local nonprofits remain optimistic and proud of the community’s sustained focus on racial issues.

GREATER FLEXIBILITY: Natasha Adwaters, executive director of Children First/Communities in Schools, says that in response to COVID-19 and racial unrest, foundations have become more flexible about how grant money can be spent. Photo courtesy of Children First/Communities in Schools
It will also take commitment, stresses Ellison. The YMI, he says, is working to create partnerships with community members and local businesses. “We want people who are invested in the work,” he declares. “Not people who are looking to sponsor an event series so they can get the ad or a tax write-off, but people who are genuinely interested in supporting the Black community of Asheville and in supporting and upholding Black history.”

Furthermore, notes Adwaters, that work will require ongoing financial support. “We are still in need of donations,” she says. “And speaking from a leadership and planning perspective, it’s always better if we know that we can rely on ongoing support and not the one-over. But both are important.”

Additionally, says Thomas, advocates must continue to educate themselves and others about the issues. They must also understand where they can be most effective in creating change. “There are some things people of color have to take the lead on, such as leading other people of color,” he explains. “And there are some things that we need our white allies to do as well, such as taking down these systems that their ancestors created, and explaining things like institutional, structural and systemic racism to their family and friends.

“And that’s a tricky situation,” continues Thomas. “You don’t want to push too hard and alienate somebody, but sometimes a tough conversation is required — followed up by a whole lot of facts to show somebody the truth of something.”

Above all, though, what’s required of both the nonprofits themselves and the communities they serve are perseverance and focus. Because while the spotlight on any particular movement will inevitably dim, says Harris, “We’ll still be here doing the work even when the hashtags fade.”

YWCA of Asheville is on a mission. For 113 years, we have been at the forefront of movements for social justice, freedom, and equality. Love our work?