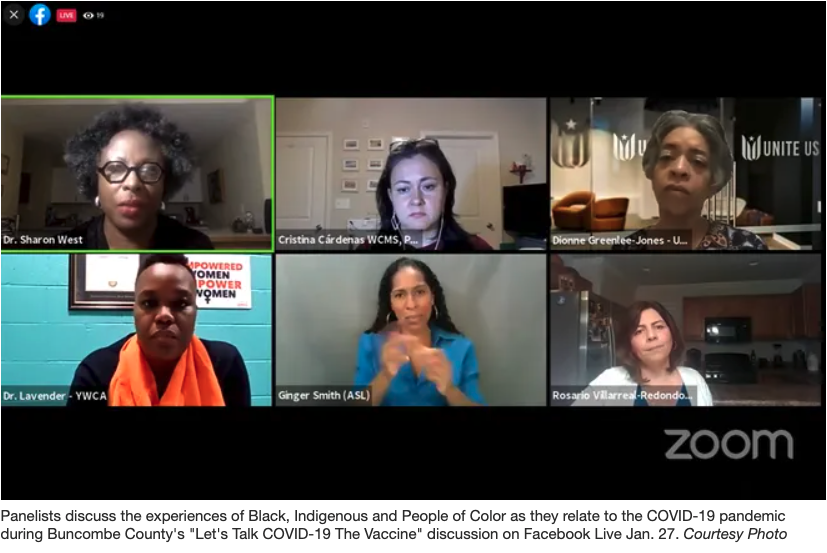 For a successful COVID-19 vaccine distribution in Buncombe County, officials and health providers are going to have to dig deep, communicate and connect with people of color, experts say.

In a panel discussion Jan. 27, the first of a two-part “Let’s Talk COVID-19 The Vaccine” series hosted by Buncombe County and the YWCA, community health experts talked about the deep-seated fears and mistrust that exist in communities of color, and the hurdle they represent to the COVID-19 vaccination effort.

Moderator Amieris Lavender noted Buncombe County’s decision over the summer to declare racism a public health crisis and saying the hour-long discussion Jan. 27 was a key step in forwarding those actions with community conversations.

Sharon West, clinical ethicist, historian and registered nurse, also served as moderator for the panel, kicking off the discussion with historical and lived experiences of people of color.

Society has essentially told Black, Indigenous and people of color, “You’re not valued very much,” West said, and the scenarios are many and are present-day, as much as historical.

“The unethical, the historical narratives are very much present, and it’s very much a part of the collective conscience of people who are my age and older,” she said.

She mentioned specifically Marion Sims, a gynecologist known as the father of modern gynecology who performed surgeries on enslaved Black women without anesthesia, believing Black people did not have the same level of pain as white people.

West also talked about Henrietta Lacks, whose cells were commercialized in drugs without her knowledge, including medicines still in use today, without any consent or compensation.

For a present-day example, West noted Susan Moore, a Black doctor who documented on Facebook her own biased treatment in the hospital with COVID-19.

She recommended people turn to the book “Medical Apartheid” by Harriet Washington to learn more about similar historical instances.

“It’s very interesting how we do have these historical narratives, and this is real,” West said.

And those narratives are impacting how communities of color locally perceive the COVID-19 vaccine, panelists said.

Cristina Cardenas, health access coordinator for Western Carolina Medical Society, community health worker and Spanish interpreter urged the Latino community not to fear the vaccine, but find out the facts and make their own decision.

“It’s not a matter of getting the information out there,” she said. “What I’ve seen is that it’s a matter of being thoughtful about how and who delivers this information. Just throwing information at a community that is already shrouded in fears and apprehension and mistrust, it just, it doesn’t stick.”

Visiting those communities and churches is likely a better way to deliver that information to Latino communities, Cardenas said.

It’s happening at the border, in communities when people look for care and when they’re turned down because they don’t have insurance or a social security number, she said.

“All that is going to create a lot of mistrust,” Villarreal-Redondo said. “And if we put that mistrust with the lack of information that is around, it is going to be very hard to get the Latino community to trust the vaccine.”

Dionne Greenlee-Jones, community engagement manager for Unite Us and NC Care 360, said she hears over and over again that the vaccine is too hard to get, even when it’s available.

There are issues in communication and difficulties signing up, she said, and people in the African American community are concerned that they’re being overlooked.

And with historical events like sterilization experiments in North Carolina and the Tuskegee syphilis study where African Americans were particularly those that were disenfranchised even further, she said, people are scared.

“They’re scared,” Greenlee-Jones said. “People are legitimately unwilling to take chances with their health when they’re not quite sure who they can trust.”

More:West: What does ‘declaring racism as a public health crisis’ mean?

In the Latino community, misinformation and mistrust are big problems, panelists said, everything from whether it’s going to be expensive, that it’s unsafe or that they’ll need to provide ID or documents they may not have.

“So all of those fears are more important than the thought of ‘Oh I have to take care of myself,'” Cardenas said. “We have to reassure them and educate them, but I think one or two posts on a website, on Facebook, or a 30-second slot in the news is not going to be enough for the Latinx community.”

Those fears have been a part of daily life for decades, she said, and it’s going to take a long time to unseat them, requiring a boots-on-the-ground approach.

“We have a lot of anti-vaccine propaganda around,” Villarreal-Redondo said. “It’s really hurting our community.”

Many times that information circulates in trusted networks, too, she said, and the grouping of people into phases to get the vaccine is making it more difficult for some.

If a married couple is 65 and 64 for example, Villarreal-Redondo said, their family member giving them a ride to the vaccine location will have to take off work twice instead of just once.

Communication and access are also issues in communities of color, panelists said.

“When you try to reach out to the Latino community or any community, please test your system,” Villarreal-Redondo said, especially Spanish-language phone options, something that’s often lacking or overly tedious.

Other inequities, including access to needed technology, have also been brought to the forefront by the pandemic, Greenlee-Jones said.

“What we’re doing is not working, and we need to really come together and look at other ways of contacting our communities, because like Cristina said, there’s a lot of miscommunication out there,” Greenlee-Jones said. “Even if people are looking at the news or accessing information, there’s a lot of broadly publicized misinformation.”

The challenge is getting the correct messages in front of Black and Brown community members, she said, and may need to include radio or other methods. Cardenas noted the lack of Spanish-language cable news outlets.

“We’re just not hitting the mark,” Cardenas said. “It took a while, I think, for a lot of those kinks to be ironed out, but it’s almost a year, and we’re still there.”

It’s also about listening to those communities too, even when some of their concerns may be outlandish, Villarreal-Redondo said.

“When we go to a specific neighborhood, maybe they have a different kind of fear that we don’t even know,” she said.

She’s found out that many in the Christian community have concerns about how the vaccine is manufactured, as well as concerns about being tracked via a chip in the vaccine and then deported, or even that the government is trying to thin the population of elderly, and those concerns have to be addressed.

“Sometimes for you maybe it’s not a valid argument and even maybe you laugh about it,” Villarreal-Redondo said. “We cannot laugh about all the comments that are out there. We need to stop, listen and inform.”

The community needs to work together, said Greenlee-Jones, especially with medical providers, to think outside the box, reach out to nurture relationships and address implicit bias.

“We have a lot of work to do, but again the medical profession is amazing, and I know we can work together to do this,” she said. “This is a health equity issue that needs to be addressed, and we are going to be able to fix it only if we work together.”

It includes medical providers recruiting people of color so that folks in the community see health care providers that look like them, conducting some self-reflection on their biases and earning the community’s trust, panelists said.

The vaccine hesitancy is due to a lack of trust and fragmented information, she said, reiterating a point made by Greenlee-Jones of Black and Brown organizers and medical providers who know how to disseminate information in a culturally congruent and effective manner.

Villarreal-Redondo said in the Latino community, years of mistrust in the system mean it’s going to take health workers going neighborhood by neighborhood to do the best they can, and it won’t be fixed in a week or two.

And that effort is going to have to include success stories that can be shared and witnessed by those in the community, she and Cardenas said, from people they can trust.

“We do not want this to be a time where we have access to something like this vaccination and we have Black and Brown individuals who refuse to take it,” Greenlee-Jones said. “That would be the biggest travesty.”

It’s going to take everyone working together and those institutions have to be held accountable for equitable outcomes, she said.

“We are all responsible to make sure that our communities get vaccinated,” Greenlee-Jones said. “And until we take it personally like that, we’re going to fail, and I don’t think we have an opportunity here to fail without resulting in additional losses of members of our Black and Brown communities.”

YWCA of Asheville is on a mission. For 113 years, we have been at the forefront of movements for social justice, freedom, and equality. Love our work?