HomeWeek Without Violence
A- A A+

YWCA is on a mission to eliminate racism, empower women, stand up for social justice, help families, and strengthen communities. For more than 20 years, we have set aside one week in October as a Week Without Violence – a week to raise awareness and engage action to end the broad spectrum of violence – as part of a global movement with World YWCA to end violence against women and girls.

At YWCA, we know that not all violence is acknowledged or responded to equally and that some victims go unrecognized altogether. That’s why, for the last five years, we have focused on ending gender-based violence, including domestic violence, intimate partner violence, sexual assault, trafficking, and harassment.

We invite you to join us from October 14 – 18 as we share information, elevate stories, talk with policymakers, and raise awareness with a common goal in mind: together, we can end gender-based violence.

Sunday, October 13th: Help us kick off Week Without Violence 2019 a day early by tuning in to hear from programs and experts working to support survivors and prevent gender-based violence. Download, listen, and share this special WWV19 edition of Organize Your Butterflies, YWCA USA’s podcast. We will post a total of five podcasts during  Week Without Violence 2019, so be sure to listen to them all!

Monday October 14th:  On Indigenous People’s Day, join us on social media and in our lobby to lift up stories and highlight the crisis of Missing and Murdered Indigenous Women.

Tuesday, October 15th: This Capitol Hill Call-In Day, we invite you to engage your Members of Congress by taking action online; calling your legislators; and engaging with these discussions on social media, using the hashtag #WWV19 to tweet at your Member of Congress.

Wednesday, October 16th: Join us as we Imagine a World Without Violence, featuring an art exhibition throughout our building by children and youth of all ages from Asheville and Buncombe County imagining peace in their homes and communities.

Thursday, October 17th: Making the Local Focal: engage with your state and local elected officials on this important issue. Ask questions about their position on policies that support survivors and help hold them accountable.

Friday October 18th: Ending Gun Violence: Disarming Domestic Abusers: Join us for an engaging Twitter chat from 2 to 3 p.m. ET, hosted by our team at @YWCAUSA! We will be discussing the intersection of gender-based violence and gun violence. Participate in the conversation on Twitter using the hashtag #WWV19. 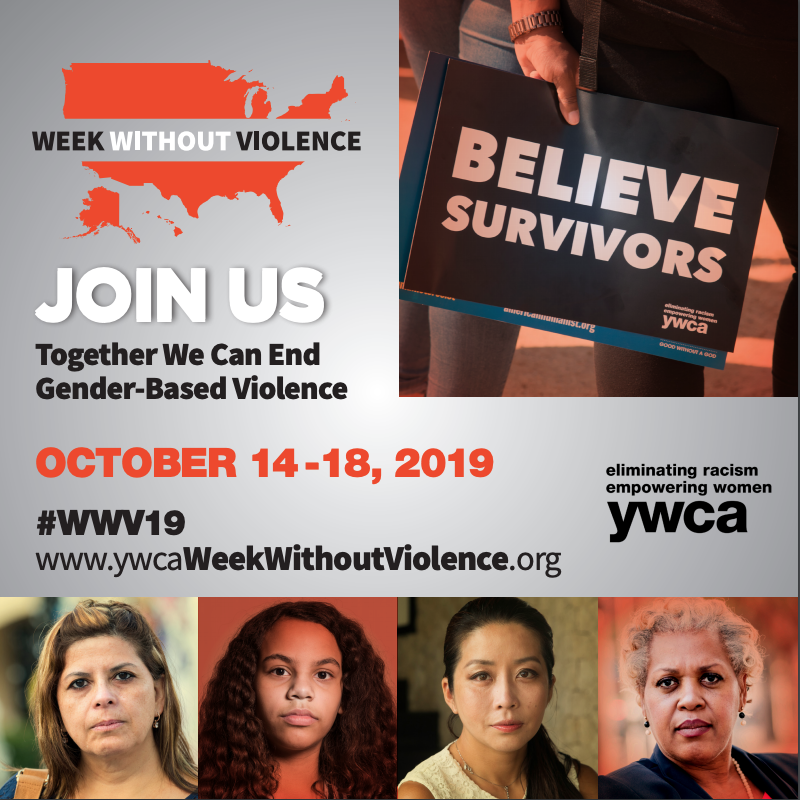